COVID-19: a note to our customers.

We’re working to keep you and our employees safe.
Learn More > 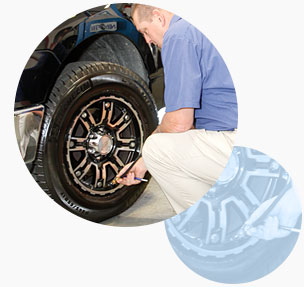 *NitroFill services available at select locations. Contact your nearest store to find out if the service is offered!

Wheel rot results when water is trapped inside a tire. A nitrogen-filled tire has less oxygen, which means it is less likely to rot because of the absence of oxidation, rust, and water. With nitrogen in your tires, you’ll have less corrosion and better bead sealing.

When you fill your tires with air, you’re adding water to them as well. The pressurization of air turns humidity into water. As a result, a significant amount of moisture is trapped in tanks where this air is stored. When you drive, the heat created converts this water to a gas, which expands and increases your tire pressure. With nitrogen, there’s no humidity and fewer changes in tire pressure.

A tire’s life greatly depends on its inflation. Overinflation wears tires in its center, while underinflation wears down its shoulders. But, tires filled with nitrogen maintain a more consistent inflation level, reducing the potential for wear and extending the life of the tire.

Over 90 percent of blowouts are the result of under-inflated tires. Because nitrogen maintains more consistent pressure, tires filled with nitrogen are less likely to fail.

When a vehicle’s tires aren’t inflated enough, its gas mileage is reduced. Tires filled with nitrogen have less rolling resistance, as nitrogen loses pressure at a slower rate than air, resulting in improved fuel efficiency.